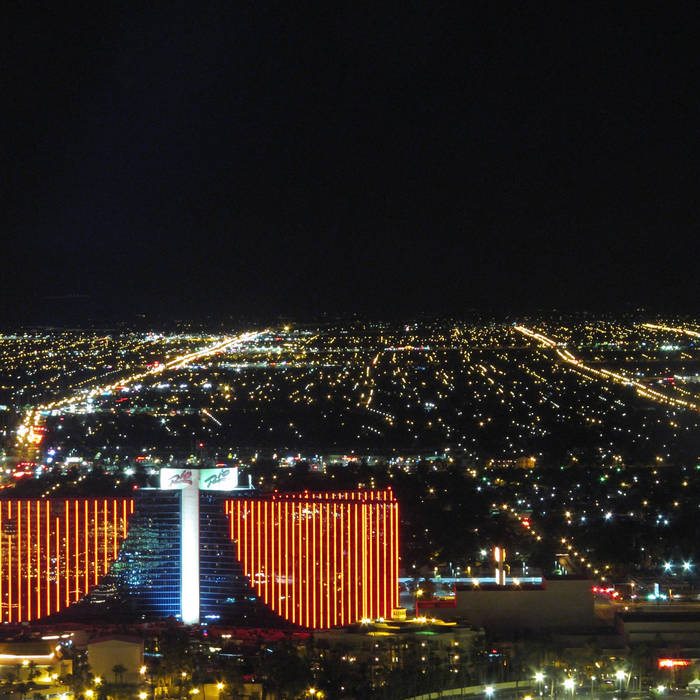 How does one find light against dark, good against evil, in a city that has effectively obliterated shadows with the conquest of constant light? Crushing out the pathways of light-spectrum conquest, the Las Vegas cityscape drains the sky of their stars, preventing any amount of the possibility of variance, of CMYK-induced overload across the spectrum, until the city looks as if it is solely land against the vast open. In some ways this makes Las Vegas the most American city possible; in other ways it is also the most un-American city: by effectively crushing out the tireless battle of good against evil, forcing both to sit side by side in the strip, holding hands, until both are exhausted from pure spectacle. Where else to tired-eyed families walk at 1 am amongst immigrant workers handing out cards for call girls? (The first-time visitor might be surprised to find out that prostitution is actually illegal in Clark County, which homes Las Vegas. In fact, those who spend money on prostitution in Nevada spend 66 times more money illegally than legally--- location and convenience is still the capital factor.)

In the hottest days of summer, all buildings are air conditioned to the point where one is required to wear a coat. Sex workers operate flagrantly in front of the street preacher. The city as a whole clings on to its right wing, evangelist-based moral roots while dispensing of all self-regulation of such (it is no surprise that Trump businesses thrive in Vegas, quite possibly the only place that they actually do). Again, no shadows--- an entire city always in chiaroscuro. In the day, the light punishes the outdoor dwellers, while the buildings provide dark, poorly lit labyrinths to get lost in. At night, that light is replaced with the punishing neon of the strip, and against the pitch-black sky, the casinos start to feel strangely well lit. How does this city not swallow itself in some sort of science fiction-esque space/time contradiction? Any day I suspect the pressure to push itself to critical mass, and the whole vast area will swallow into a gulp, remaining only as a single point of light, similar to what both Dante (seeing God) and Einstein (an object moving at the speed of light) described.

Or as put (much better) By Joan Didion:

“Las Vegas is the most extreme and allegorical of American settlements, bizarre and beautiful in its venality and in its devotion to immediate gratification, a place the tone of which is set by mobsters and call girls and ladies’ room attendants with amyl nitrite poppers in their uniform pockets. Almost everyone notes that there is no “”time” in Las Vegas, no night and no day and no past and no future […] neither is there any logical sense of where one is. One is standing on a highway in the middle of a vast hostile desert looking at an eighty-foot sign which blinks 'STARDUST' or 'CAESAR’S PALACE.' Yes, but what does that explain?"

Inspiration credits for this album:

("At Luxor" uses a sample from and improv set by Greg Fox; "View from the Stratosphere" uses samples from a recorded conversation with John Cage, which can be found on Glenn Branca's album "Indeterminate Activity of Resultant Masses")